So what exactly is a living wage?

It is an income level that is needed for a household to be able to afford a minimum acceptable living standard, which consists of; the ability to participate in society, the opportunity for personal and family development, and freedom from severe financial stress. Sometimes, living wage is also described as fair wage or decent wage.

When Bank Negara speaks of a minimum acceptable standard of living it goes beyond just being able to afford necessities such as food, clothing and shelter. At the same time it should only reflect needs, not wants. It does not calculate the costs of different lifestyles or location. That around 40% of the Malaysians is living below the living wage does not mean that all hope is lost, even in western countries such as the United Kingdom there is still around 25% of the population earning below the living wage.

There is no one specific standard for the living wage. It is different with every country. In Canada the living wage also includes the possibility for healthy child development and in New Zealand it includes being able to live life in dignity.

Why is there a living wage?

The support for the living wage arose in the 18th century due to the low pay and bad working conditions for manual workers. The recent calls for a living wage reflect the renewed efforts to enable workers to afford minimum acceptable standard of living, amid a large number of underpaid full-time workers seeking social assistance. As economies started growing there has been a increasing amount of concentrated wealth in the hands of the highly educated. This has resulted in income inequality and became one of the main reasons that motivated the need for a living wage framework.

Besides allowing employees to afford a minimum acceptable standard of living, the living wage could also cause a positive spill-over to the broader economy as it may lead to a lower employee turnover rate and improvements in employees’ morale and productivity. 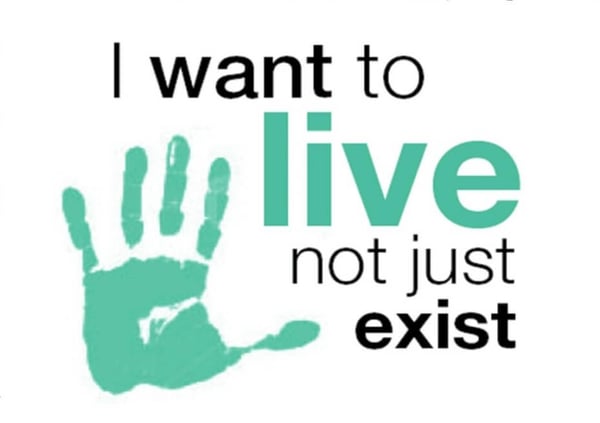 The differences between the living wage, minimum wage and aspirational income. 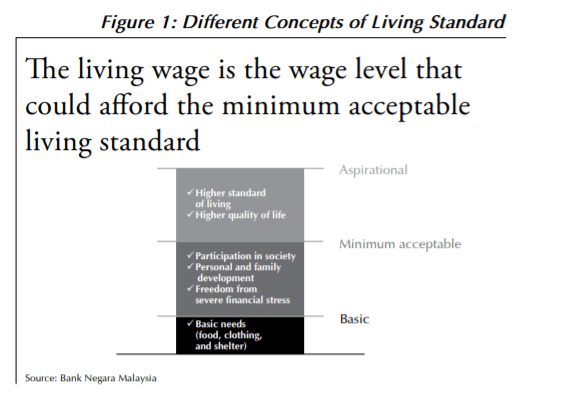 How do they calculate the living wage?

An important part of developing the living wage is estimating a wage level that represents the minimum acceptable living standard in the given area or region. There are multiple ways in which the living wage can be calculated. They often follow a standard approach as outline. First, determine whether there are large variations in price and living standards across location and household alignment, which would give cause to create several estimates of a living wage. The next step is to recognize the standards on basic needs, public feedback and data on household expenditure. As there is a diversity in households different profiles need to be created in order to find out which items should be deemed as necessities. Depending on where someone lives costs will be different. Look at things such as type of transport to work, eating-out due to hectic city-life, at least one vacation per year, contributions to the EPF, etc.
This eventually gives rises to different brackets based on the different profiles as the example below shows. 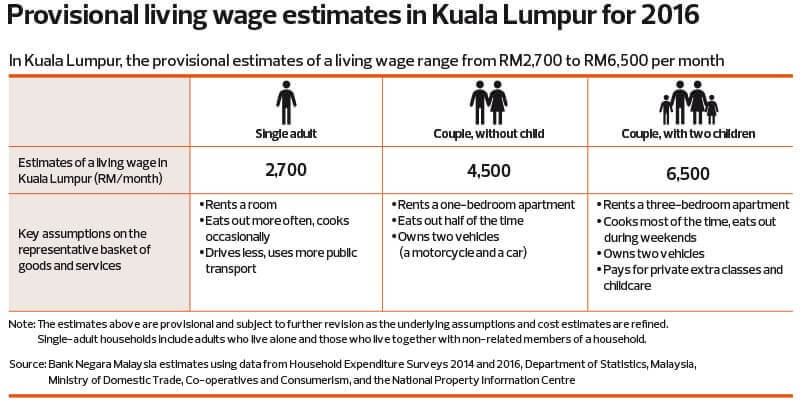 What will be the impact of having a living wage in Malaysia?

Studies have found that the living wage brings benefits to both employees and employers. However, the success of the living wage depends on several things. For example, it will be easier to pay a living wage during an economic boom compared to a financial crisis. Moreover, the living wage can only be effective if it is set at a realistic and sustainable level. As Malaysia starts to become a high-income nation, all parts of society should be able to reap the benefits. It is important that Malaysia overcomes the challenge of modest productivity growth and start to strive for high-productivity, high-paying jobs that can afford the minimum acceptable living standard.