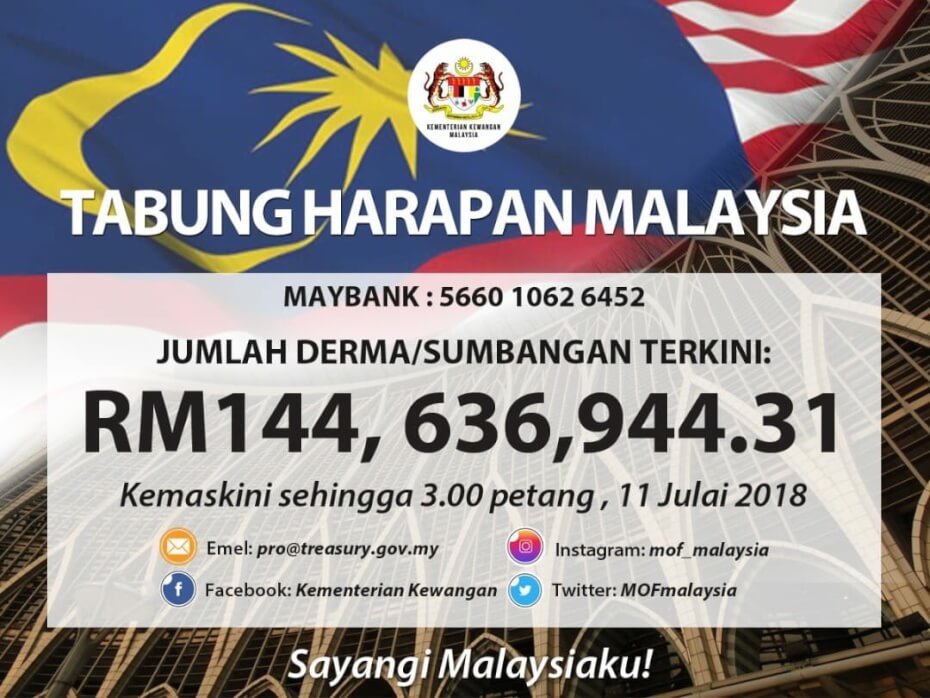 Since its launch on 30th May 2018, Malaysians have been actively donating to the Tabung Harapan Malaysia (THM) fund in major efforts to help settle the national debt. In just under one month, the fund has garnered an impressive amount!

Tabung Harapan Malaysia (THM) is managed by the Ministry of Finance (MOF) donations are to be deposited to a Malayan Banking Berhad (Maybank) account under the Jabatan Akauntan Negara (Account No: 566010626452). All donations are tax deductible.

Finance Minister Lim Guan Eng, did explain that the official trust fund, besides helping to pay off the national debt, is for the people to show patriotism and unity. However, these noble intentions of Tabung Harapan have been met with critical and sometimes distasteful comments. There was even a Twitter thread on how the government should have opened an account in Bank Negara Malaysia (BNM), instead of Maybank. So we realized many netizens still don't know the role of BNM.

Well, for those who don't know, BNM is the central bank of Malaysia and serves as the nation’s monetary authority. That basically means, they are:

BNM is definitely not the place to do your usual banking matters. You can learn more about Bank Negara and what they do on their website here.

While it is highly encouraged for Malaysians to play a part in this movement, extreme precaution must be taken as there have been fake THM posters bearing a fake account number circulating on social media, as reported by The Star. Don’t fall for them! Those who plan to deposit money into the account are recommended to double check the account number and account holder name before confirming their donation.

It was also reported that MOF will appoint an external auditor to audit THM. While we wait for that announcement of the official auditor, we certainly expect to hear how the fund can be fault-proof against discrepancies and fraud. In the meantime, we are proud to see corporate leaders, associations, unions, political parties, sports bodies, celebrities, and the youth contributing, raising awareness of the national debt and its implications, in the spirit of patriotism and of shared responsibilities.