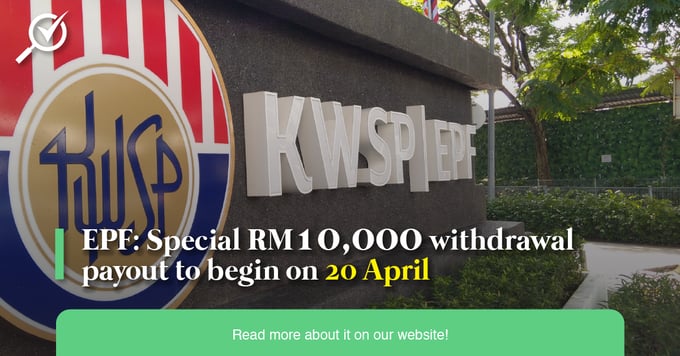 The Employees Provident Fund (EPF) has announced that all contributors below the age of 55 years old may start applying for the special RM10,000 withdrawal facility. The application starts from 1 April 2022 to 30 April 2022, while members will begin receiving payment from 20 April 2022.

During his announcement, Prime Minister Dato’ Seri Ismail Sabri Yaakob stated that the decision to allow EPF withdrawals was not an easy decision, but it was made in consideration of the requests from the nation. As of 2022, many have been pleading for a “last withdrawal”, including the Federation of Malaysian Consumers Associations (FOMCA). But in spite of that, many others were still opposed to it.

Once again, the Employees Provident Fund (EPF) has emphasized that the latest RM10,000 withdrawal facility should be the last Covid-19 related withdrawal as there are many concerns about Malaysians using up their retirement funds.

“The EPF would like to reiterate its concerns around members’ retirement adequacy and hopes this will be a precursor towards the rebuilding of retirement savings and reforming of the nation’s social security system,” the fund stated, adding that RM101 billion of EPF savings had already been withdrawn under i-Lestari, i-Sinar, and i-Citra before 2021 ended.

“As the country rebuilds the economy and more people have returned to work, the EPF believes that this should be the last facility allowed under the special withdrawal initiative,” it stressed.

Ultimately, Prime Minister Ismail Sabri noted that EPF contributors should withdraw their savings only if it is truly necessary. Meanwhile, further details regarding the process of the application will be provided in the near future, said the EPF.