eSports: A Career That Makes Millions 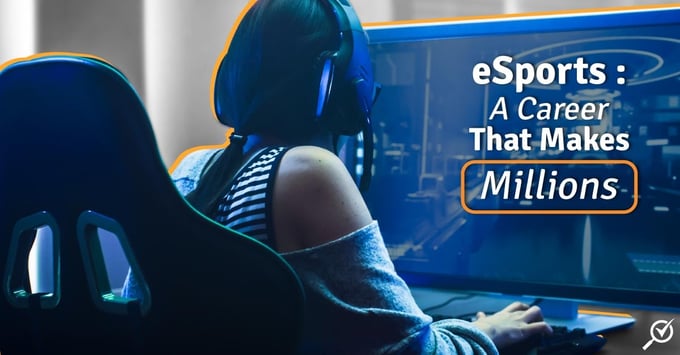 How many of you know what a Micro Genius is?

If you do, you had an awesome childhood! Remember games like Super Mario, Donkey Kong, and (my absolute favorite) Contra? And if you were the younger sibling, chances are you were either Luigi in Super Mario or the dude with the blonde flat top hair for Contra. Does bring back some sweet memories, right?

Video games used to be something that we play during breaks or on weekends. Most of the time my video games would be kept under lock by my parents, and too much of it would end up in some serious grounding. I'm sure plenty can relate!

Over the years we've witnessed the evolution of video games by welcoming Game Boy Advance consoles and PlayStations into our homes. Then as we stepped into the digital era, games too, made its way to the online scene. That's when we learnt about games like Counter-Strike and Dota, where you get to compete with friends or even strangers.

This borderless possibility have changed the way consumers engage with games. It is no longer used as a tool to pass time, but has become a huge part in the lives of many. Today, this mere 'hobby', also best known as eSports, has grown in ways unimaginable. If you are serious about gaming, it's possible to make a living out of it. In fact, you could even be a millionaire.

Unbelievable as it sounds, this article will take you on a journey to see how eSports can rake in the big bucks and how it is possible to turn it into a career. 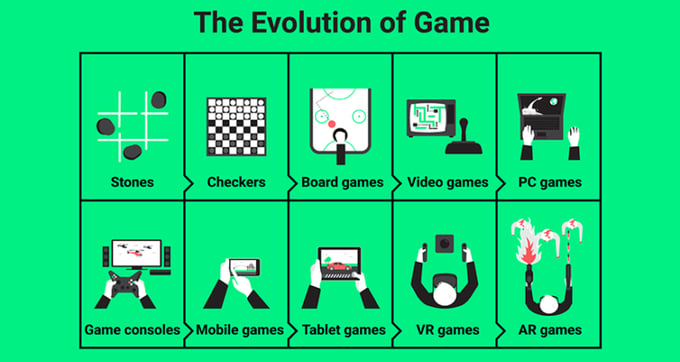 Welcome to the world of eSports

eSports is huge in today's world, especially in countries like South Korea, China and the United States. Don't take our word for it, take a look at the statistics and figures compiled by MoneyPod on a global scale. 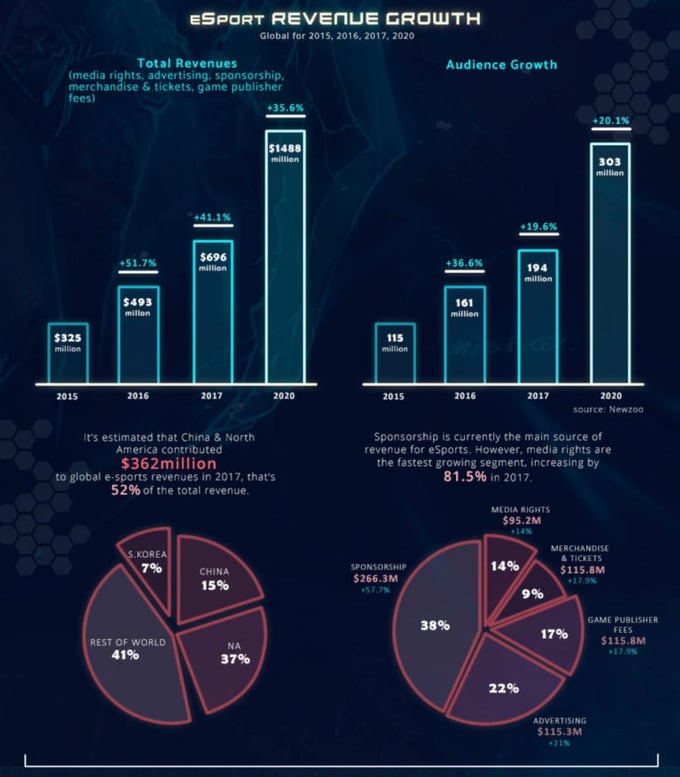 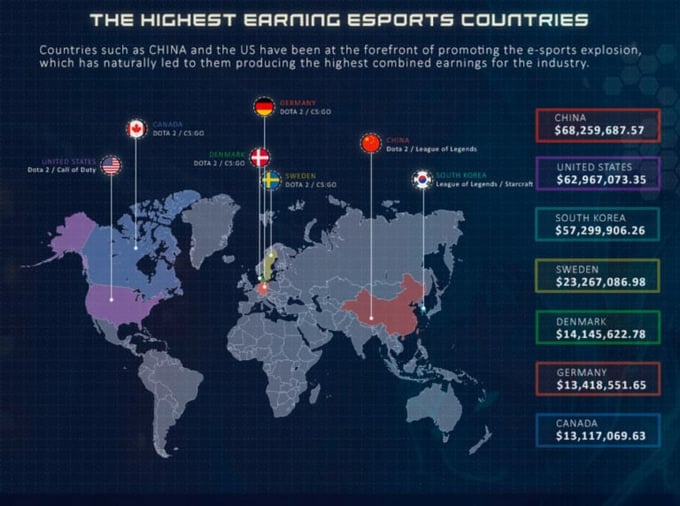 ... and if you are still not convinced, take a look at what went down during the League of Legends 2019 World Championships late last month.

In case you didn't know, League of Legends (or better known as LoL) is one of the world's biggest eSports. This multiplayer online battle arena game draws in as many viewers as the Super Bowl and has just given away a $2.5 million in prize money as well as a 70-pound trophy with a case designed by giant fashion house Louis Vuitton!

But where does Malaysia stand? Are we a nation that recognizes eSports? What is the government's take on this? Or are our parents even receptive to the idea? Try telling them that you're about to quit your job to become a full time gamer, and see what their reaction is like!

Based on that, we probed further. We wanted to know if Malaysians think eSports should be contested as a medal sport in the Olympics. This is in light of the recent announcement where eSports will be a part of the 2019 Southeast Asian (SEA) Games as sanctioned by the International Olympic Committee.

These were the results.

While gaming has always been popular, the rise of eSports and its potential beyond just our bedrooms comes as something new to many of us. 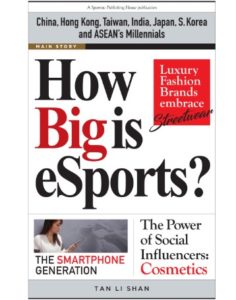 To better understand the potential and the challenges of eSports in Malaysia, we spoke to one of the country's popular online gamer, Tan Li Shan or better know by her In-Game-Name (IGN) as @Sugar.T.

This Platinum-ranked League of Legends gamer girl is also the author of "How Big is eSports?".

In an exclusive interview with CompareHero, she shared some valuable insights into the local gaming arena and made it easy for a non-gamer like me to fathom its mechanics.

So if you're a noob like me, here's her very interesting perspective.

Vino: How big is the potential of eSports in Malaysia?

Li Shan: Think of it this way. Imagine how big football is. It is probably the biggest sport in the world. Think of the World Cup, or Copa America or even the Barclays Premier League and your La Liga. Now replace the word football with eSports. That's how huge it is. Now, look at how we are faring locally in the global football arena and that is exactly how the Malaysian eSports situation is as well. Truth be told, we have amazing players which I believe would succeed on a global level but unfortunately, the challenges that we have ahead of us curb our potentials.

The moment she tied it in with football, it instantly made sense to me.

So, we've decided to put the well-known game of football side by side with eSports to better illustrate her point. We compared the English Premier League with League of Legends.

Vino: What are some of the challenges that you mentioned?

Li Shan: Again, let me use football as an example. We have programmed in our minds that the Malaysian football team can never match that with the likes of Brazil, England, and Argentina. Why is that? Don't we have good footballers? I'm sure we do. But why can't a Malaysian footballer play for Manchester United? Herein lies the issue of talent scouting. Likewise with eSports. Throughout my years in gaming, I have played with amazing players but due to the lack of or no talent scouting at all, we will forever just play in our own cocoon. Talent scouting remains the biggest obstacle in the local gaming arena. 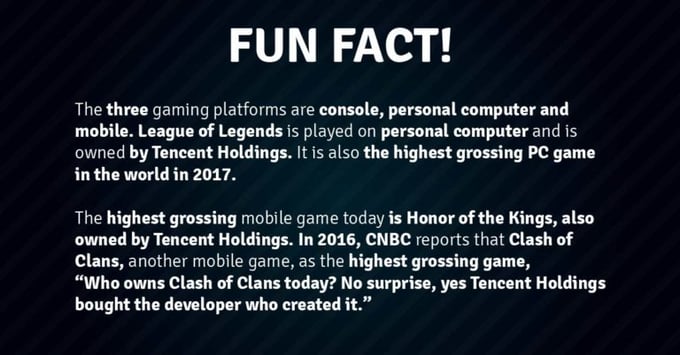 Vino: What do you think of the Government's allocation of RM10million in the recent Budget for the local digital economy to MDEC, which part of it will be utilized for eSports?

Li Shan:  In my opinion, RM10 million isn't enough. This is because if we look at some of the other countries that are leading this industry, for example, they have an advanced infrastructure to accommodate eSports. This requires more support from the Government. We need talent scouts so that good players in Malaysia can join good teams on a global scale. We must have the platform to at least connect to Garena, a digital services company that engages in gaming and eSports based in Singapore. This will enable Malaysia to then be more exposed, thus making it easier for our local talent to be scouted. On the note about the budget allocation, I believe that this allocation is for the development of the digital content scene which also includes animation and digital arts; not purely for game development and eSports.

Vino: Can you make money by playing games?

Li Shan: Basically there are two ways in how you can earn in eSports. The first is streaming and the second is if you become a professional gamer and if you are good enough, you could get signed up by a team. But let me also share with you that in order for you to stream to make money, you first need to spend money first. A proper streaming set would cost up to RM10,000 paired with the local industry that is not fully recognized. In my opinion, until and unless we beef up our eSports industry to match that of the more advanced countries, I don't think eSports is the right career choice for Malaysians.

While I remain hopeful about the progress of e-Sports in Malaysia, there is still little to show for in terms of developing a complete ecosystem for the cause. As e-Sports is close to the hearts of many youths in the country, I strongly feel that more emphasis be it financial or other means or support is much needed to boost the industry.

While we are still in the infant stage of eSports, things might change in the near future at the backdrop of a robust industry that we are optimistic will soon make its wave into the local arena.