Take note that the weekly announcement has been changed to Wednesday. The new cycle now runs from Thursday to Wednesday.

Get the latest petrol price in Malaysia. We provide weekly updates every Wednesday at 5pm on fuel prices for RON95, RON97, and Diesel as the Malaysia government revises the pricing. Bookmark our page and check back for the up-to-date prices.

Prices of fuel have been changing on a monthly basis since September 2018, but it will now return to a weekly price system based on the Automatic Pricing Mechanism (APM) formula.

Related: A Comparison of Petrol Loyalty Cards In Malaysia

The fuel prices in Malaysia for 2018 started off low as oil prices dropped. However, RON95 and Diesel started to flat-line from May onwards, until December at RM2.20 and RM2.18 respectively. RON97, on the other hand, gradually increased until a drop in December to RM2.50. You can find a more detailed price table at the end of the article for a week-by-week price of petrol in 2018.

Since fuel prices will change weekly and are based upon changes in the average price of oil per litre, you can adapt your petrol purchases to profit from cheap weeks and avoid the expensive weeks. Check back every week to find out the petrol prices for the next week!

8% cashback on petrol, groceries and eWallet.

Apply for the credit cards above and get an exclusive free gift when you activate it!
Read more: bit.ly/CompareHeroCCPromo

Click here to purchase or renew your car insurance and get e-Vouchers worth up to RM200 for FREE!

How Petrol Prices are Determined in Malaysia

After months of having fixed fuel prices for RON95 and Diesel (RON97 remaining on a floating price system), all fuel prices returned to a weekly price-float mechanism. Prices will be updated and changed on a weekly basis on every Friday onwards. This will benefit a lot of motorists as they will be able to fill up their vehicles at lower prices whenever crude oil prices fall.

See more: How to Save Money with Weekly Petrol Pricing.

Historically, the price of petrol in Malaysia was subsided by the government to keep the price artificially low. However, this changed in recent years when the government adopted a managed float system where the price of fuel would be announced monthly. Price adjustments are made based on the average price per liter of refined oil.

Can the price at the pump deviate from the ceiling price?

Malaysia has been protected from this effect in the past because the government would subsidize fuel prices but, with the introduction of the managed float system, that is no longer the case. Major influences on the price of oil are OPEC (a collective of oil exporting countries) and non-OPEC oil exporters such as Russia. Depending on their individual objectives these players might decide to cut or extend their production of oil, effectively driving the price of oil up and down.

Theoretically, individual petrol station owners could choose to set a lower price than the prescribed ceiling, but they would need approval from the government to be allowed to do this. Up until now, we have had no reports of petrol stations deviating from the ceiling price, so you can safely assume that the prices quoted here are what you are going to have to pay at the pump.

Related: Hybrid/Electric vs Petrol Cars: Which is cheaper in the long run?

What is the Difference between RON95 or RON97 in Malaysia?

RON97 is more expensive than RON95. It is generally considered to be the higher quality fuel type. RON97 is believed to be better for your engine and enhances the performance of your car, as compared to RON95.

Contrary to popular belief, RON97 does not necessarily give you more mileage than RON95. The mileage your car makes per tank refill is largely dependent on other factors such as the efficiency of your car. However, a heavier or lighter foot will ultimately decide how much fuel your car will burn.

RON97 is not necessarily the better fuel, even though it is higher priced. If your car does not explicitly require RON97, you are better off sticking with RON95 because it’s cheaper (most cars are optimized for RON95 or even RON92!). You may read about several tests that our local motor-journalists have done for more information: RON95 vs RON97 by Paultan – be aware that your mileage may vary (pun intended) as it also depends on your car’s engine.

How to Save on your Petrol Expenses

If you are a frequent driver, petrol expenses are likely going to be one of your main expense categories. You can’t avoid buying petrol, but you can make significant savings on your petrol by spending your money the right way.

For example, you can make significant savings up to on your petrol spending by using a Cashback Credit-card with cashback on petrol purchases. If you can combine the utility of a petrol cashback card while benefiting from a weekly fuel price that is relatively low (and a lighter right foot), you can save large amounts of money on your petrol expenditure

Alternatively, you can check out our article on 12 Ways To Reduce Your Petrol Spend. 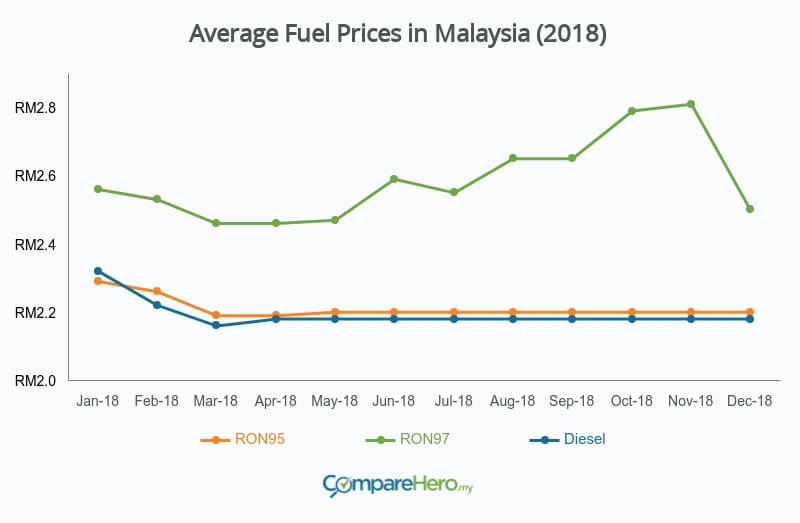