Malaysians Will Have To Pay To Leave The Country 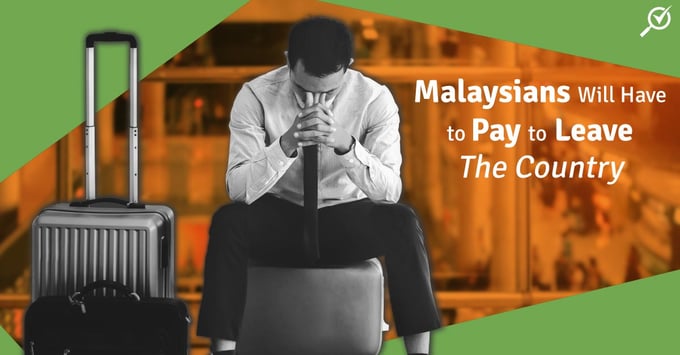 Malaysians will have to pay a departure levy ranging from RM8 to RM150 when travelling out of the country starting Sept 1. In a gazette published on July 31, Finance Minister Lim Guan Eng has fixed Sept 1 as the effective date for the departure levy.

According to the Departure Levy (Rate of Departure Levy) Order 2019, anyone leaving Malaysia for Asean countries will be charged RM8 for flights in economy class and RM50 for other classes.

For flights to countries outside Asean, Malaysians travelling in economy class will be charged RM20 while those in other classes will have to fork out RM150.

Asean countries listed are Brunei, Cambodia, Indonesia, Laos, Myanmar, the Philippines, Singapore, Thailand and Vietnam. Under the Departure Levy (Exemption) Order 2019, it is pointed out that infants and toddlers aged below 24 months, pedestrians and individuals riding by themselves in any type of vehicle for personal use, including any passenger in or pillion rider on such a vehicle, will be exempted from the levy.

Exemptions include any crew on duty on board the aircraft and passengers in transit arriving at any international airport in Malaysia heading towards their next destination not exceeding 12 hours.

How does our exit tax compare against Asean neighbours? 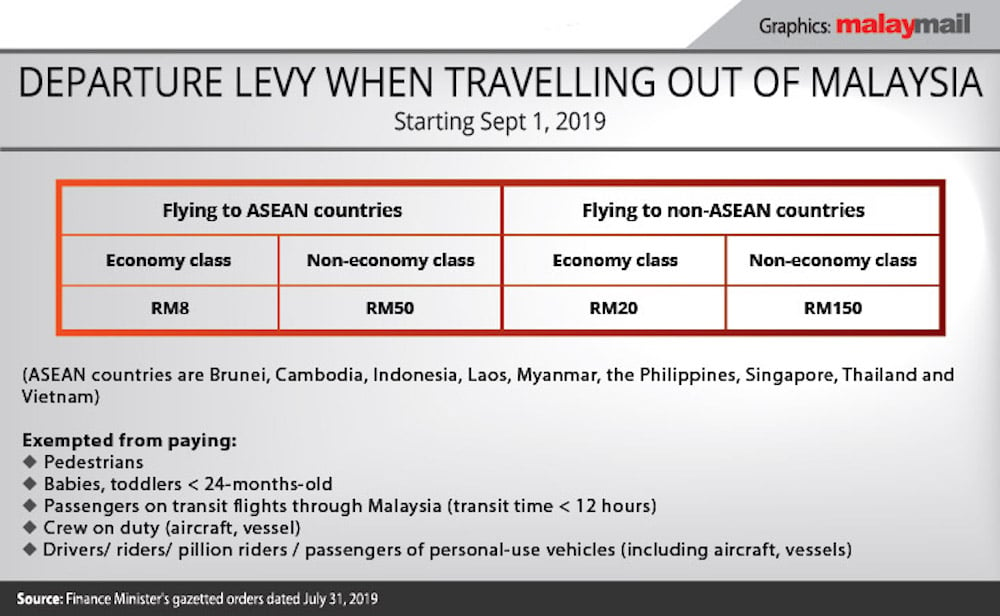 Children aged below two years are exempted, and in case you are wondering, it is an international standard.

Just be aware that this departure levy collection is to be paid to the government, and is separate from the passenger service charge of RM35 (Asean destinations) and RM70 (non-Asean international destinations) that is already being collected and paid to Malaysia Airports Holdings Berhad — the main airport operator in the country — for the maintenance and improvement of airport facilities.

Please do note that the terms used by different countries on the fees may not be the same. It is also not always clear if the fees are airport taxes (which seem interchangeable with Malaysia’s passenger service charges) or actual departure taxes, as different terms may be used depending on the source.

According to the Civil Aviation Authority of Thailand’s information on PSC as of November 18, 2016, the rates collected depends on which operator handles which airport. For example, 700 baht (RM94.93) and 100 baht (RM13.56) is the PSC for international destinations and domestic destinations at the six airports operated by Thailand Public Company Limited and perhaps most familiar to tourists (Suvarnabhumi and Don Muang in Bangkok, Chiang Mai, Chiang Rai, Hat Yai and Phuket).

Thailand’s official tourism website states that international departure taxes are now included in flight ticket prices, but did not specify the rates. It said there are no official departure taxes for domestic flights, but said some privately-owned airports such as Koh Samui Airport has been known to impose such fees.

This airport tax has to be paid at the airport of departure, with those exempted being passengers on transit using the same plane or crew members on duty.

A travel tax is imposed on those who fly out of the country, with 50 per cent going to its Tourism Infrastructure and Enterprise Zone Authority (Tieza), 40 per cent to the Commission on Higher Education for tourism-related educational programmes and courses, and the remaining to the country’s National Commission for Culture and Arts. Those exempted from paying the travel tax include overseas Filipino workers (Filipinos who are permanent residents abroad and with a stay period of below a year in the Philippines), infants aged below two, crew members, students on government scholarship, government staff on official trips.