2020 OPR Cuts: What Does This Mean For Malaysians? [UPDATED] 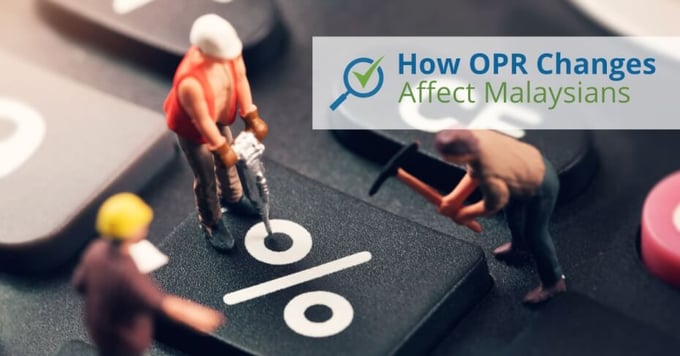 The OPR is an overnight interest rate set by BNM. It is a rate a borrower bank has to pay to a leading bank for the funds borrowed. The OPR, in turn, has an effect on employment, economic growth and inflation. It is an indicator of the health of a country's overall economy and banking system.

UPDATE:
The Monetary Policy Committee (MPC) of Bank Negara Malaysia decided to reduce the Overnight Policy Rate (OPR) to 2.75 percent. The ceiling and floor rates of the corridor of the OPR are correspondingly reduced to 3.00 percent and 2.50 percent, respectively.

The adjustment to the OPR is a pre-emptive measure to secure the improving growth trajectory amid price stability. At this current level of the OPR, the MPC considers the stance of monetary policy to be appropriate in sustaining economic growth with price stability.

The move to cut the rate to 3% is a response towards what looks like a weak economic outlook, with moderate economic activity in the first quarter of 2019. The lower rate is also to ease difficult financial situations.

MPC, Monetary Policy Committee, will continue to monitor the domestic growth and inflation in an effort to support price stability.

The OPR is an overnight interest rate set by BNM. It is a rate a borrower bank has to pay to a leading bank for the funds borrowed. The OPR, in turn, has an effect on employment, economic growth and inflation. It is an indicator of the health of a country's overall economy and banking system.

Most banks will lend out as much money as possible in terms of loans whilst maintaining the minimal cash required by Bank Negara. However, in the event that cash withdrawal exceeds the amount of cash available in the bank, the particular bank will then need to borrow cash from other banks, and make an interest rate, which is where OPR comes in. Increasing the OPR will immediately increase the cost of borrowing for banks, and thus, will lead to a chain effect.  OPR is also how Bank Negara regulates financial institutions and banks.

On 25 January 2018, Bank Negara Malaysia increased the Overnight Policy Rate (OPR) by 25 points to 3.25%. Find out why, and how the OPR increase would affect you below.

This is the first OPR hike to happen since July 10, 2014. As a quick recap, BNM has maintained the OPR at 3% since July 2016 which was the last time any changes were made to the OPR.

"With the economy firmly on a steady growth path, the MPC decided to normalise the degree of monetary accommodation. At the same time, the MPC recognises the need to pre-emptively ensure that the stance of monetary policy is appropriate to prevent the build-up of risks that could arise from interest rates being too low for a prolonged period of time. At the current level of the OPR, the stance of monetary policy remains accommodative." - Monetary Policy Statement

Previously, BNM maintained the OPR at 3% during its last Monetary Policy Committee (MPC) meeting on 9 November 2017. However, the MPC also released a statement which said that it “may consider reviewing the current degree of monetary accommodation” given the strength of the global and domestic macroeconomic conditions. This then spurred talks that the OPR may increase.

In the same statement, BNM said the standpoint of monetary policy remains accommodative at the current level. Monetary policy is the macroeconomic policy laid down by a central bank. This involves management of money supply and also interest rate. It can also be defined as the demand side economic policy that is used by the government of a country to achieve objectives like inflation, consumption, growth and liquidity.

But before we delve into details of why there could be an OPR increase and what the increase could mean for Malaysian consumers, let’s first understand what OPR is.

Why Would Bank Negara Raise (or Reduce) OPR?

In July of 2016, BNM announced the reduction of OPR, which was a first reduction to happen in 7 years. The OPR reduction happened in light of the risks that were rising from Britain’s withdrawal from the European Union (EU) that was also known as Brexit.

BNM then decided to reduce the OPR due to uncertainties in the global environment which could also negatively impact Malaysia’s growth prospects. Central banks also tend to increase interest rates to tackle inflation based on the scenario that growth is too strong and on fears that there could be asset imbalance in the system.

When the interest rate is too low for too long, the cost to get funding is cheaper and as such, people may tend to over-borrow or a systemic slowdown can happen which then puts the economy in bad shape. However, an increase of the OPR will lead to an increase in loan interest rates. This will mean higher costs of borrowing, which can then also curb the accumulation of personal and household debts.

It was also reported that Bank Negara is of the opinion that Malaysia’s economy has become more firm, with both the domestic and external sectors registering strong performance. The country’s gross domestic product (GDP) growth is estimated at 5.2% to 5.7% in 2017 and estimated to be 5% to 5.5% in 2018. Therefore, the reason behind plans to increase the OPR may also be as a result of Malaysia’s economy growth.  Whilst Affin Hwang believes the rationale for increasing the OPR is to prevent the economy from exceeding its potential output level, which could then translate into higher inflationary pressure.

What Does An OPR Increase (or Decrease) Mean For Malaysians?

Therefore the rise of OPR will result in higher interest rate or profit rate for loans that are tagged to BLR or BFR.

As a result of this, taking on a loan after the OPR increase will cost more for Malaysian consumers because of the increase in the loan interest rate. So buying a car will then cost more, and servicing an existing housing loan may also cost more as the interest rate has gone up.

However, it won’t just be all doom and gloom for Malaysians if the OPR increases. Loan interest increasing would then also mean that fixed deposit interests, saving account interests, amongst others, will increase in tandem too. Therefore if you have substantial saving, an increase in the increase rate will help Malaysians get more from their saving. A decrease, on the other hand, would see lowered costs for borrowing, but also a decrease in fixed deposit interests and saving account interests.

Ultimately consumers will benefit from knowing the OPR, irrespective of whether they are a borrower or depositor. As a borrower, when the interest rate goes up, you will have to pay more in terms of instalment. Or else, your loan tenure will increase if you don't want to increase your current instalment payment amount. But if you're a depositor, you will get to enjoy better interest rates on your savings as a result of the OPR increase, and vice versa.

Is Cost of Living The Main Concern? Or is Our Cost of Lifestyle Increasing?