T20, M40 And B40 Income Classifications In Malaysia

This is based on the Department of Statistics’ (DOSM) Household Income and Basic Amenities (HIS/BA) survey of 2019. HIS/BA is conducted twice every five years. Over the years, the bar for each group’s income level has increased and this is one of the indicators of economic growth.

The concepts and terms used here are summarised as: 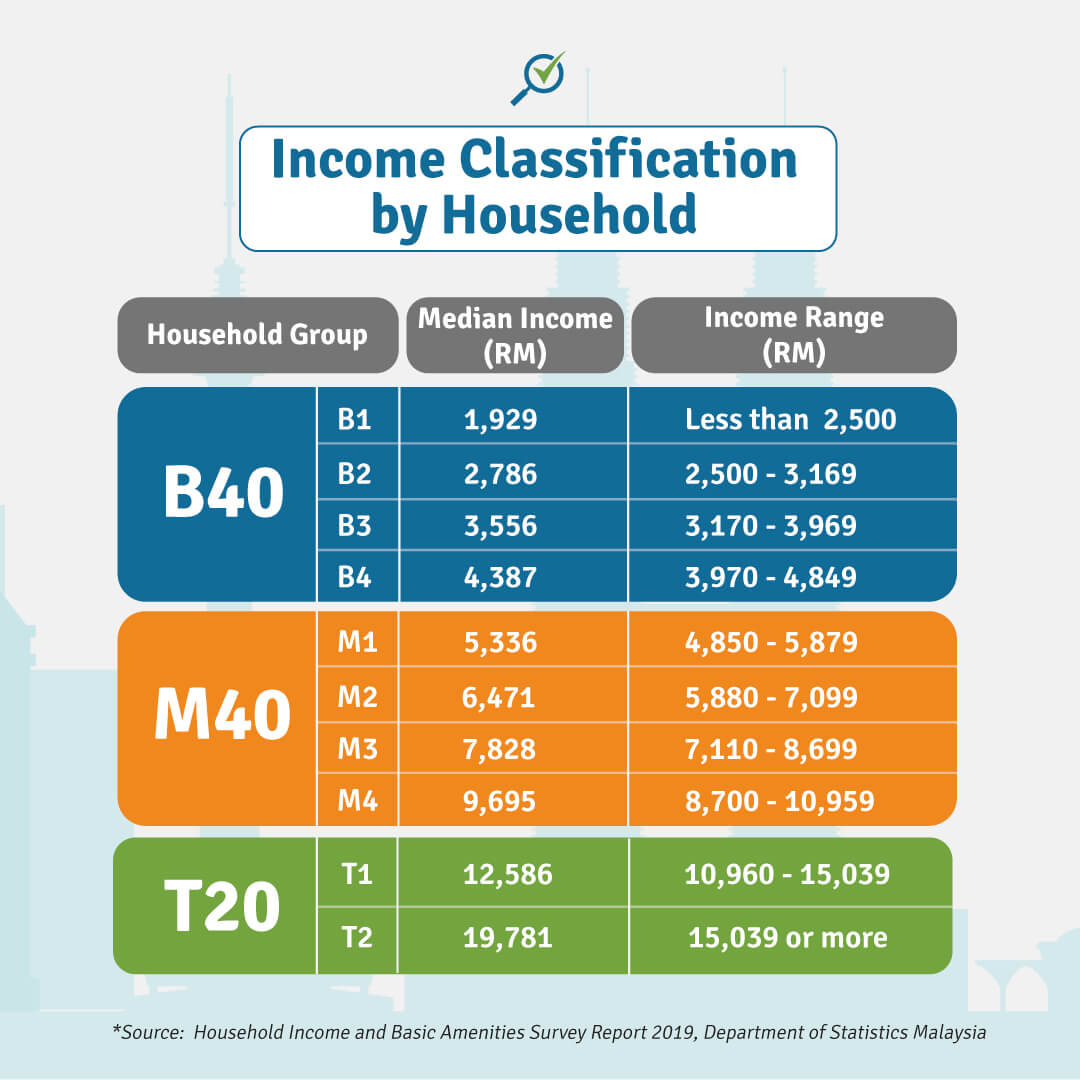 Keep in mind that the income group definitions are not fixed. The names, B40, M40, and T20, represent percentages of the country’s population of Bottom 40%, Middle 40%, and Top 20% respectively. The values may increase or decrease year-to-year, depending on the country’s GDP, which is why the median household income is used as the determinant instead.

Though the income levels for each group has improved over the past three years, we should not ignore the escalating costs of living resulting from inflation and slower wage growth. To be exact, if we include inflation into the picture (3.15%, 2.1%, 2.09%, and 4.1% respectively in 2014, 2015, 2016, and first half of 2017), the ringgit’s value is diminishing.

It was also reported that the average monthly income of employees, based on the 2016 Salaries and Wages Survey Report by the Department of Statistics, increased from RM3,045 in 2016 to RM3,495 in 2019.

To explain this situation better, here’s the median income level for each state and you can see if you and your family are above or below the median standard. Income differences between each state are quite significant based on the report above. T20 median income in Kelantan, Perlis and Pahang, can be compared to the median income of the M20 group in Kuala Lumpur.

According to a report prepared by the Department of Statistics Malaysia on Gross Domestic Product (GDP), seven states have surpassed the national level by 4.3% for the year 2019. Selangor achieved an increase of 6.7% while the Federal Territories by 6%. Apart from the three states, Kelantan also increased to 5.3%, the Federal Territory of Labuan by 5.2%, Negeri Sembilan 5.1%, Kedah 4.6% and Perlis 4.6%.

See also: Jobs with the Highest Starting Salaries for Fresh Graduates in Malaysia

Apart from Kuala Lumpur, Selangor, and Putrajaya; Pulau Pinang and the remaining 12 states’ median income level did not exceed the median income level for the M40 group in Malaysia. This means the rest still have a gap to close in order to improve the income gap between urban and rural areas.

Nonetheless, it is satisfying to see the huge jump in both Terengganu and Perak state’s median income level from 2014, most likely thanks to a boost in the tourism sector.

To give you a clearer picture, we also found out the top 20 districts in the country with the highest median household income in 2016. However, this does not mean you can get the same for moving into any of these areas. You might if you work hard and be smart about it!

Districts with the highest median household income in 2016

Now that you know about the median income in different states and some districts, you should find out if your financial position is better or worse than the average Malaysians here. Making financial decisions are not easy, so remember to check out our blog for the latest insights and make your life better!