Money Lessons You Can Learn From Game Of Thrones 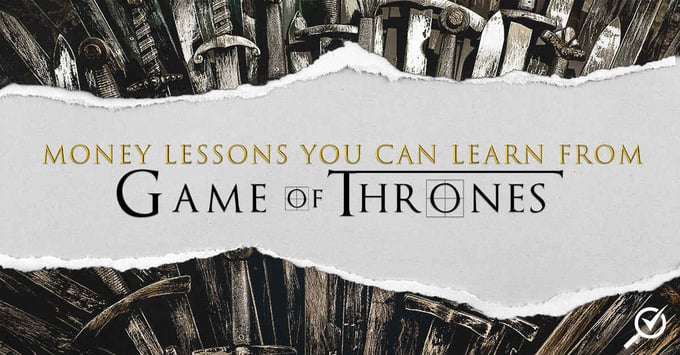 On the surface, Game of Thrones appears to be nothing more than a violence-packed medieval fantasy. But one slash from a Valyrian steel sword soon reveals that the series carries some heavy financial lessons. Yes, between all the scheming and slaughter, financial planning and money management lessons from the houses and characters is something that can easily be applied to real life.

Money and finance are closely tied to the rise and fall of the great houses of Westeros, just as they are to our houses in the real world.

Whether you love it or never watched it, seven seasons of this popular HBO series contains a wealth (yup, pun intended) of social and economic lessons that we’ve listed down for you. Warning: There will be spoilers. And blood. And dragons. Beware the folly of kings.

From Season 1, remember House Baratheon? King Robert took the throne of the Seven Kingdoms of Westeros after a successful rebellion and proceeded to neglect his duties as a king. Alienating his closest advisors up until the point of his untimely death. Everything he fought so hard was undone due to his carelessness in ruling his kingdom and left us with The War of Five Kings.

His son and heir to the throne, Joffrey ultimately fared no better and proceeded to make himself the most despised King in Westeros (to which audiences around the world loved to hate him too) as a tyrant who then ended up on the wrong end of a poisoned wine goblet.

Stay grounded and be fully committed to managing your finances at all times and never let yourself be manipulated into living beyond your means. Don’t let yourself be taken in by short-term successes like these two failed kings.

Build a legacy that lasts, "Winter is coming".

Look at Tywin Lannister, despite his extremely dysfunctional family and ungrateful children; he was always obsessed about creating a legacy that would last. In his eyes, every decision he made was always for the greater good of house Lannister. Unlike Robert Baratheon, whose goals were too short-sighted and eventually turned into dust, Tywin was always planning one step ahead to ensure his family’s interests were well protected. Well, right up until he took a crossbow to the stomach courtesy of his son Tyrion, of course.

And of before you know it, "Winter is Here" (thanks Whitewalkers), so it does help to always think ahead and be prepared. Now this is important advice for most people, especially when you consider that surveys have found that as many as half of Malaysians aren’t saving for retirement at all, and that most who are saving aren’t putting enough aside.

The years will fly by quickly and before you know it, you might find yourself facing retirement. You should always be working towards building a financial legacy that you and your family can depend on in your retirement years. But don't forget to enjoy life as well because you never know what might happen in the future.

See also: Imagine Being Able to Retire Rich, Instead of Broke and Poor

Too much debt is a killer. And as the saying goes, “A Lannister always pays his debts.” where we’ve seen Tyrion and Jaime live up to this saying several times in the Game of Thrones series by paying off anyone they owe coins or favours to. We’re also pretty sure that the saying also means that any attempts at backstabbing or murderous plots against the Lannisters will be harshly dealt with in kind.

This track record of paying debt is the Lannisters powerful asset in your their wealth-building endeavors (hence the popular saying, “Rich as a Lannister.”)

Don’t let your debts spiral out of control and make sure you know the difference between good debt and bad debt. The real-world application of always paying your debts is good credit. Handling your debts responsibly builds trust with lenders, who are then more willing to work with you when you come looking for your next loan.

Changing allegiances can pay off.

After years of abuse from his family, Tyrion Lannister decides it’s time to switch sides. He allies with Daenerys, who wants to take back the throne from the Lannisters. Basically,just because you’ve always done things a certain way doesn’t mean it's the best way.

This final season of Game of Thrones also kicks off with allegiances that continue to change as new kings and queens gain power, opposing sides do battle, and characters meet one another across the show's vast geographical map. Researchers did investigate who died in the past 7 seasons and they tracked the causes of death and details about the characters, to determine the best strategies for staying alive. It turns out that the best thing you can do is to switch allegiances regularly – staying loyal will only get you killed.

Dumping your longtime savings account and switching to another bank might give you a much better interest rate on your money. Going with a different car insurance company might lower your premiums. It’s wise to shop around from time to time to make sure you're getting the best deal. You might feel more appreciated if you take your business elsewhere.

Leverage someone else's money and time

Cersei Lannister took advantage of both sides of leverage in a single maneuver when she arranged a loan from the Iron Bank, to hire 20,000 mercenaries, defeating her enemies and consolidating her power.

Real estate investors tend to understand this lesson implicitly. When you borrow for a property mortgage, you leverage other people’s money to buy an asset that grows your income and net worth. Even after deducting property costs, you could still earn a cash flow every month. When you hire a property manager (for more properties), you leverage their time so that you don’t have to sacrifice your own.

Leverage is one money lesson you should learn sooner rather than later, or you’ll still be relying on your own sweat and your own savings in 20 years from now, rather than employing others’ money and labour. While everyone thinks Game of Thrones is about revenge, it’s really about hard assets. You don’t win anything without gaining ground, and controlling it.

Life hasn’t been easy for Daenerys Stormborn Targaryen (Mother of Dragons, Khaleesi, the Unburnt, Breaker of Chains — rattling off titles for the fair-haired Dothraki queen). She had it rough, what with her psychotic older brother and family’s history of having a tendency to go insane. Not only did she get married off as a political move, her warlord husband Khal Drogo soon ended up dead, due to a plot by someone Daenerys had initially trusted. But Daenerys persevered, sought solid advice and made strategic alliances of her own which put her at the head of an army with not one, but THREE dragons. Despite a the setbacks throughout the seasons, she never allowed her circumstances to defeat her.

If you're faced with financial setbacks, like bad credit or your savings account looks like it’s been pillaged by a Dothraki horde, you can bounce back! All you need is a good solid plan, some hard work and a little patience.

Always keep track of your credit record and maintain a good credit history. Start by finding out what your CCRIS or CTOS reports are and then put together a plan to recover or improve.

Make sure you have a disability "rider"

Modern-day insurance products don’t exist in Game of Thrones, which is unfortunate for Bran Stark when he narrowly survives a fall from a tower and into a coma. He eventually regains consciousness and he’ll never be able to walk again. From that point on, Bran is dependent on a caregiver, one who is strong enough to carry Bran on his back. Now, where would Brand Stark be without Hodor? And even after Hodor died (cue ugly crying) protecting Bran, there were others to help Bran move.

Having good medical insurance is one thing, but even the best policies cover only your immediate medical care. If you’re unable to work because of a disability, you need a financial "Hodor" to carry you. Sometimes it could be temporary disability, but otherwise there is no harm in preparing for a permanent disability. Accidents do happen.

Finally, the least obvious money lesson is that knowledge is power.

We see over and over throughout the seasons that mind bests muscle. Petyr Baelish uses cunning and knowledge to manipulate and better himself, the Maesters are continually looked to for guidance, and Tyrion is always able to come out on top despite his physical limitations. Knowledge is power in any situation, but even more so in the world of finance.

We can't stress how important it is to always be on the lookout and be prepared for financial winter, pay your debts and choose them wisely, have an estate plan, and build a nest (dragon) egg. But most of all, arm yourself with the financial knowledge to successfully navigate money throughout your life. If you don’t, you will know nothing!