Pennywise, Not So Pound Foolish 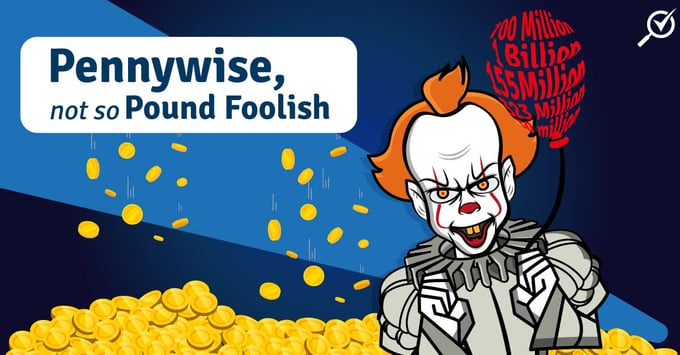 Are you afraid of clowns?

If you are, that's probably thanks to PennyWise. The menacing dancing clown that eats children. Made famous from the 90s mini television series, IT made its way to the big screens in 2017. This adaption of Stephen King's classic was an instant hit attributed to the great lore by the author and the excellent vision of the director Andrés Muschietti.

Fast forward to 2019, IT came back with its sequel called IT Chapter II and needless to say, it smashed the box office in just two days since it hit the cinemas on September 2019.

Apart from terrorizing the audience with a lot of jump scares and eerie backdrops, the IT franchise whose main ambassador PennyWise has raked in some serious bucks over the span of 2 years since the first movie came out.

We are talking billions here. Ever wondered how every child's nightmare managed to make all this money? Let's run through some fun facts.

While we all know IT as the brainchild of Stephen King, it was actually the brother-sister duo of Andrés and Barbara Muschietti that took the well-known movie title to greater heights.

"IT: Chapter Two’ Pushes The ‘IT’ Movies Past $1 Billion Worldwide"

IT Chapter II costs more than the previous one.

Here is a simple breakdown of what went down post-release of IT’s sequel:

In the United States and Canada, the film was projected to gross between $90 million (RM376 million) to $100 million (RM418 million) from 4,570 theaters in its opening weekend, and the week of its release broke Fandango’s record for most advance tickets sold by a horror film.

The film made $37.4 million (RM154 million) on its first day, including $10.5 million (RM41 million) from Thursday night previews, the second-highest total for both a September opening and horror film, behind the first film’s $13.5 million (RM54 million).

It went on to debut at $91 million (RM381 million), also the second-best ever for a horror film and a September release, while being over $30 million (RM125 million) less than the first film.

The lower debut was attributed to a more mixed critical reception, as well as the nearly three-hour run-time, which exhibitors said curbed business. It made $40.7 million (RM167 million) in its second weekend, retaining the top spot, before making $17.2 million (RM71 million) in its third weekend and being dethroned by newcomer Downton Abbey.

Although we've witnessed the end of PennyWise in the second chapter, Bill Skarsgard (who played PennyWise) and Andrés Muschietti were in talks to perhaps make IT Chapter III happen.

So, if IT Chapter III materializes, I wouldn't be surprised if it did well in the box office. Perhaps there could be a Nun and PennyWise face off? ‍♂️

I guess we could say that creating PennyWise was a wise decision after all.