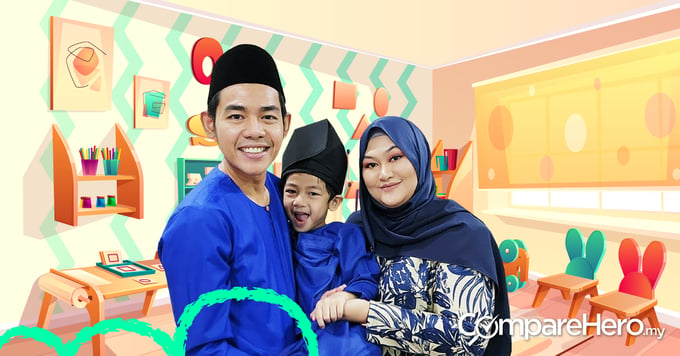 What is the cost of raising a kid in Malaysia? Now having a kid is no easy matter, especially when you add finances into perspective. The National Population and Family Development Board report back in 2020 indicates, that financial factors are major obstacles for couples when it comes to their desired family size.

“According to the 5th Malaysia Population and Family Survey, 65% of married people said they would like to have more children if financial issues were not a hindrance.”

Costs that took a toll on parents included the high price of baby products and food, such as disposable diapers and milk, plus babysitting and high nursery fees.

Now with the current high cost of living and inflation, raising kids is no mere feat! While I don’t have a kid, I can only imagine how tough it would be to raise a kid in today’s economy. #LetsBeReal, I ONLY have enough to spend for my OWN necessities, yikes!

So I asked Nur Ainaa Samsudin, 32, who’s working as a radio news presenter and a mom to an adorable 5 years old boy, Muhammad Aisy Rizqy - current obsessions include dinosaurs, drawing, and coloring.

*To be honest, my husband and I were just married for 6 months when I first found out that I was pregnant. So we had no savings for a kid at the time. At first, we didn’t expect how high the cost would be. We had ZERO knowledge. It was only when I started surveying the cost to deliver at a private hospital that my husband and I panicked!

Who knew giving birth at a private hospital could cost tens of thousands???

We only started our savings for a kid when I found out I was pregnant. First, we opened up a bank account, then every month, we would divide our expenses for:

We only had 9 months to save up, and that’s not enough!

We also had to cut costs. So I decided that we could do the monthly check-up at a government clinic and have my labour at a private hospital.

For natural birth, it may still be affordable to labour at a private hospital, however, you will need to have at least RM 15,000 in case of an emergency cesarean. Some private hospitals will charge up to RM 20,000!

In a twist of events, I had some complications nearing my labour - getting Gestational Diabetes Mellitus (GDM) and high blood pressure that needed specialist care. I was immediately warded and safely gave birth at a government hospital.

However, because of that, we managed to have some extra money for a confinement lady!

For example, we decided an RM900 baby mattress wasn’t worth the spend but investing in a breast pump that cost RM500 was a good investment.

It was a bit overwhelming at first but it worked out once we set our priorities. It was essential for us to determine our priorities as we had other commitments too.

As we were still newlyweds, we had to not only save money for our pregnancy but we were also saving on furniture like a sofa for our rental home.

Honestly, our monthly budget has changed 360 degrees since having a kid. In the first 6 months of living together since marriage, we would dine in at restaurants anytime we want or go on an impromptu holiday. I also love collecting branded, luxury handbags.

But now, all the extra money we make goes into our baby’s savings account.

The expenses for a kid will only increase till they reach adulthood. During Aisy’s early baby stage, I used to prepare his meals using organic ingredients, and feed him kids pasta that was made out of vegetables and, biscuits that doesn’t contain artificial colouring and preservatives.

Guess what, a quarter of our household income is spent on my son!

During the baby/toddler stage:

I had to sacrifice my shopping budget because RM 400 (formula milk) is the same amount as what I used to shop at Sephora for makeup. But I didn’t mind it, I felt guilty for not being able to produce my own body’s milk, so I wanted only the best formula milk for Aisy.

During the preschool stage:

With the current economic situation…

I do think it’s a struggle to raise a kid in today’s time. Just recently, there’s been a hike in oil prices, costing up to RM 40 per kg - which is just ridiculous!

Plus with the many viral infections and epidemics going on, as a parent I would want to send my kid to the best school because I know he’ll be well taken care of in a secured and clean environment. That costs a lot of money!

Other high expenses that have to be factored in include:

This takes a toll on our budget. That’s why it’s important to have a strong savings plan.

Eh, why only ONE kid?

Today’s generation is completely different than the previous generation, who were able to raise 5 kids. Nowadays, if you have more than one child, you have to be well-off to raise them because it’s definitely not cheap to raise a kid in today’s age!

But having said that, don’t be afraid to have a kid (that’s right - A KID)! Unless you’re able to afford a second child, then go for it.

Hence why it’s essential to do family planning. Our kids deserve better care from us, parents. Why chase to have lots of kids if we can’t provide the best for them? Remember, quality over quantity!

Especially since we’re living in a pandemic time, and facing an economic crisis, as parents, we have to be smart in planning and budgeting for a better living.

However, don’t be afraid to not want a child at all out of financial fears. Plan for one and raise that kid the best you can. It’s amazing how kids can change you. Because of Aisy, I’m motivated to improve myself to be a better mother every day.

How Much To Raise A Child In Malaysia? From Pregnancy To Childhood Education

9 Enrichment Classes In Klang Valley: How Much Do They Cost?