How Petrol Prices are Determined in Malaysia

Historically, the price of petrol in Malaysia was subsided by the government to keep the price artificially low. However, this changed in recent years when the government adopted a managed float system where the price of fuel would be announced monthly. Price adjustments are made based on the average price per liter of refined oil.

The announcement that the system would change from a monthly price announcement to a weekly ceiling price came as a surprise and caught a lot of station owners off guard, fearing they would face heavy competition in terms of fuel prices. 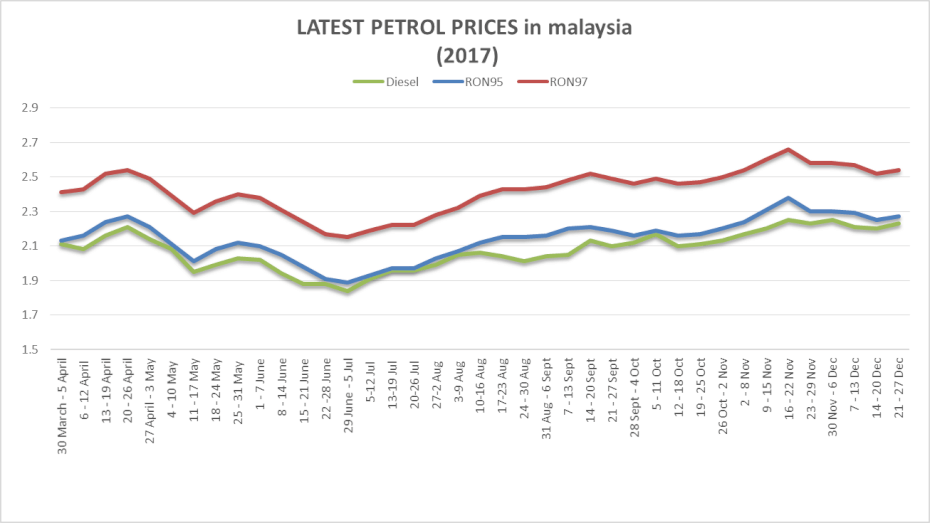 Despite the sharp rise over the past few weeks, government has stated that it will not intervene and manage the fuel prices as of the moment.

"The Finance Minister II said the government would only consider stepping in if the global crude oil price increases to such a critical level that could lead to an extreme inflation of the economy." The Sun reported.

See also: How to Save Money with Weekly Petrol Pricing

Overall, petrol and diesel prices were on the uptrend in August 2017.

Petrol prices for RON95, RON97 and Diesel have continued to drop, in line with the trend of the last few weeks. Another week of record lows, time to fill up! Check back next week for the latest fuel prices! We will continue to update this page to keep you informed and to make sure you are not overpaying for your fuel.

May 2017 Petrol Prices in Malaysia

Don't forget to check out the latest petrol prices here!

Related: 5 Ridiculously Simple Ways to Save Money On Petrol